To “highlight” it’s special report on drones, TIME magazine’s cover this week is unlike any other in this magazine’s 95-year history. They worked together with Intel to create a cover that was made by using 958 of Intel’s Shooting Star drones to create the iconic TIME logo and red border in mid-air over California.

The special report titled ‘Drones are here to stay. Get used to it.’ states “Some 3 million drones were sold worldwide in 2017, and more than 1 million drones are registered for U.S. use with the Federal Aviation Administration. (Most store-bought drones have to be registered with the FAA.) These consumer drones can fly vertically, like helicopters, and are similar to remote-controlled airplanes but with more sophisticated technology such as GPS, wi-fi and obstacle-avoidance sensors. They’re being used by tech-savvy farmers to monitor and spray crops, by researchers to measure environmental pollution and by Hollywood studios to capture action-packed footage for blockbuster movies. Drones are even saving lives, as first responders in places like Menlo Park, Calif., use them to coordinate operations and search for missing hikers. (Sixty-five people have been rescued by drones, by one estimate.).”

Read the complete article on : http://time.com/longform/time-the-drone-age/ 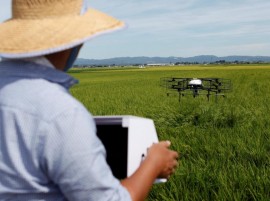